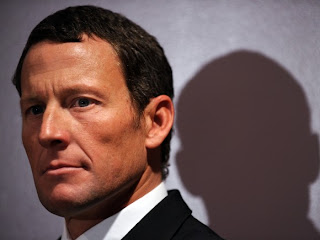 This is a very hard post for me to write. I've always been fond of Lance, through out the years, from his fight with cancer, to his victories in the Tour De France. I own all seven of his Tour De France victories on DVD and watched them quite often. I marveled at his tenacity and strength on the bike and how he seemed to drop riders at will. In my eyes, he could do no wrong.
Sure, I had heard, how some people thought he was arrogant and had to be doping in order to have such success in cycling, but I always just blew that off as people being petty and jealous of all his success.
Now with the release of USADA's, one thousand page report on him and US Postal's doping program, I find myself quite disappointed. I remember back when the Festina scandal happened and had hoped that cycling had taken a new step to a cleaner sport with less doping. US Postal did just the opposite and ramped it up to an even higher level!
It doesn't matter to me if Lance finally admits his guilt to this or not, the evidence is all in the report.He has to live with it, if he can, all the power to him.
My only hope, is that this doesn't destroy all his work he has done with his foundation, Livestrong. I will continue to wear his yellow bracelet, like I have from the very beginning and support Livestrong.
As for me, I'll move on, I'll still ride my bicycle, I'll still wear my bracelet and I'll still have a place in my heart for Lance, just not as big.