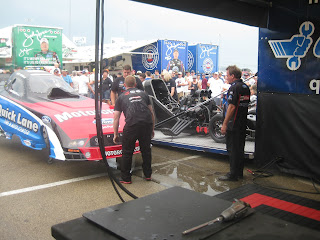 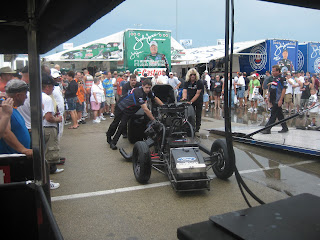 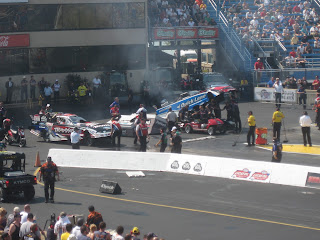 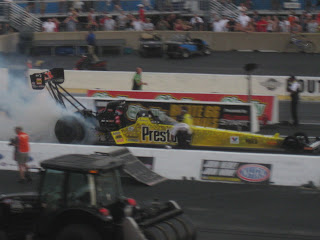 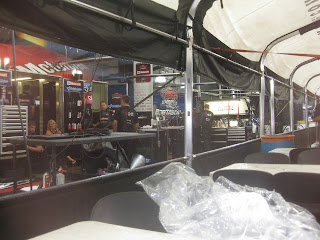 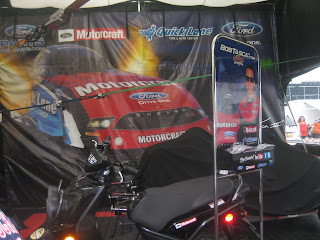 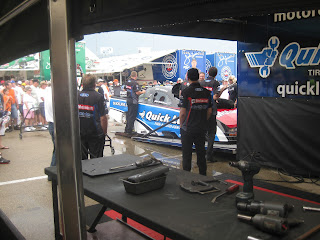 Today's Sunday, which means elimination time. We got on the premises around 9:45 and headed for the pits, we had no idea what was in store for us later. Driver introductions were at 10:30 and the racing started at 11:00. Top fuel was up first and Tony Schumacher, the number one seed was in the fourth pair to run. His motor blew up about half way down track and spewed oil all over the track. It took about 30 minutes to get the track cleaned up before racing could resume. One pair in Top fuel was left, when they stopped racing because of a severe weather warning. Everyone was told to leave the bleachers and head for cover, five minutes later the skies opened up and lightning was everywhere.By the time the rain stopped and they prepped the track, over three hours had passed.
During this weather delay we decided to head outside because the rain had slowed down. We had introduced ourselves to one of the Funny Car drivers Thursday,Bob Tasca, he's from RI. so we talked awhile. So while it was raining today Thomas bought one of his diecast models and brought it over to him to get it autographed.He not only autographed the model, he also invited us into his hospitality tent to keep dry while it was still raining.What a nice guy,that was a real treat for all of us. 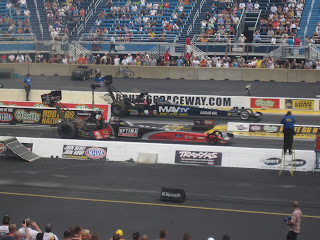 All in all it was a great trip, even with the severe thunderstorms, two of the three days.
Posted by Paul at 12:00 AM No comments: Links to this post