This Is Why I Love This Guy 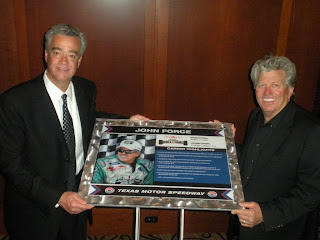 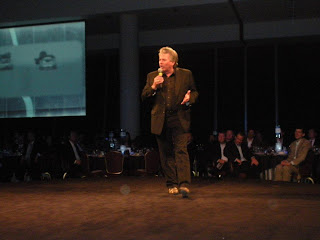 John Force brought the house down at the Speedway Club at Bruton Smith’s crown jewel of the southwest, Texas Motor Speedway, during the 8th annual
NHRA president Tom Compton (on left) and 15-time Funny Car champion John Force pose with the permanent Hall of Fame pedestal that will be on display at Texas Motor SpeedwayTexas Motorsports Hall of Fame induction ceremony. Speaking from a circle in the round stage in front of a packed house at the Speedway Club Force regaled the crowd of over 600 with tales of racing, promoting and family in a speech that ended with the nights’ only standing ovation.
“I love racing. It has been my whole life. I wasn’t born in Texas but I nearly died here. I have to say thank you to the NHRA, to my sponsors Castrol, Ford, Mac Tools, Auto Club, and Brandsource for sticking by me and most of all to the fans. That is why I do what I do, for the roar of the crowd,” said the 13-time NHRA winner in the state of Texas.
Force was the lone inductee into the Hall of Fame in 2011 joining previous members drag racing legends Kenny Bernstein, Lee Shepherd, and Eddie Hill as well as racing super stars A.J. Foyt, Mark Martin, and Bobby Labonte in the hall. Force was presented with a framed original painting to commemorate the event. A permanent pedestal featuring a reproduction of the painting as well as a list of Force’s Hall of Fame credentials will be permanently displayed at Texas Motor Speedway.
In his speech introducing Force NHRA President Tom Compton spoke emotionally and eloquently about Force’s impact on the sport as well as his universal appeal.
“John Force is one of the greatest drivers ever to race in the NHRA. He is a great ambassador for motorsports and he is one of the most unique people I have had the privilege of getting to know,” said Compton. “He spends time with the fans and they love him for that. His determination to overcome poverty, childhood polio, and a less than stellar start to his career is a testament to the ability of the human spirit to survive and excel beyond anyone’s belief.”
Midway through his speech Force’s attention was drawn to a young marine sitting at a table adjacent to the stage. He immediately thanked the young man for his service to this country, left the stage to give him a hug and then resumed his train of thought. As Force wrapped up his speech with a number of comedic tales involving everyone from his daughters to Paris Hilton to track owner Bruton Smith he took the time to sincerely thank all the people that had stood by him when he was in the hospital in Dallas and as he struggled to regain his championship form.
“I have been blessed throughout my career. I have a great family and great teammates. An honor like this is not for one man but for our whole organization. Every driver that has raced with me and every crewman that turned a Mac Tool wrench for me shares in this award. I thank every one of them for their support.”
As Force left the stage to thunderous applause the crowd rose to its feet. Force didn’t even notice since he was already signing autographs and thanking people for taking the time to support such a great event.
Posted by Paul at 11:30 AM No comments: Links to this post